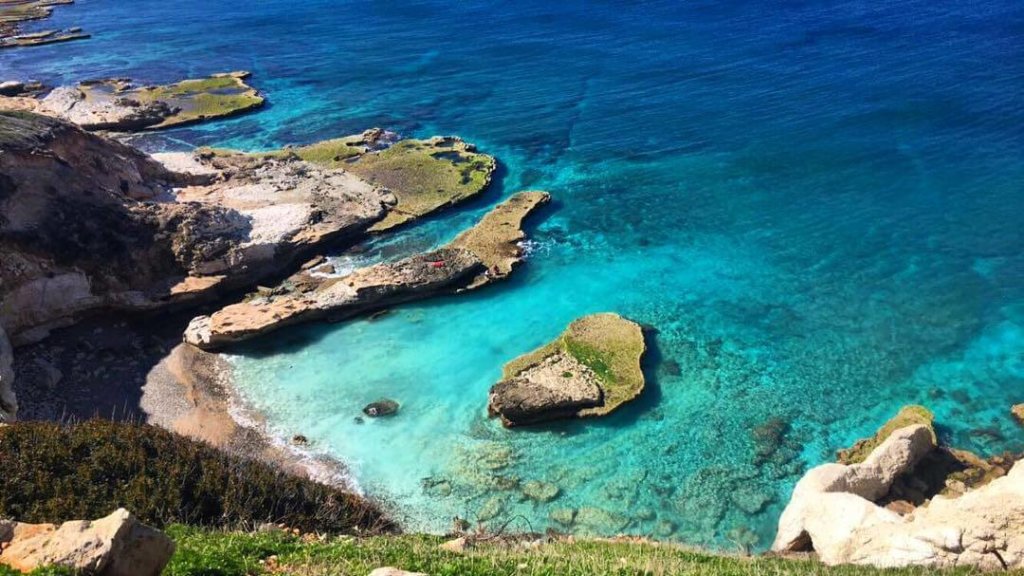 One of the best and clearest beach spots in Lebanon.

Naqoura is a town in southern Lebanon.
A trip to there is about 2 hours from Beirut, but it is worth it. The sea there is turquoise blue and one of the cleanest in Lebanon, specially in Al Bayyada.
The limestone nature of the rocks makes the water color amazing.

This area is not visited often because it is close to the border with Israel/Palestine and most people worry about the situation there, but it generally is a very calm area, that is not too crowded.

It's a great destination for a road trip. You can explore the picturesque coastal highway until you reach South Lebanon.

Naqoura is best for a great day of swimming. It offers some unique landscape for a fresh adventurous feel.
The Naqoura Wall is a great spot for some crazy cliff jumping.

If you're adventurous enough, you can even explore the old abandoned train tunnels there, which extend for kilometers.
They are an interesting walk/hike, but are pitch black, so you will need flashlights. You will run along a crazy number of bats inside, as it literally is a bat cave.

After finishing from Naqoura, you can continue your journey to Sour/Tyre. There you can switch and enjoy the great sandy beach, as it's only a 15 minute drive. You can also explore the great ruins there, and the vivid night & food life.

Snorkling kit & or at least goggles are a must to enjoy the pristine waters.
Highly recommended to get some water & snacks if you are visiting any of the public spots as you might not easily find nearby markets.

Its name means "the horn" or "the trumpet". The name rises from Sour/Tyre, which means horn or trumpet, where the head of Sour (Ras Sur) is rendered by Naqoura which is a synonym for Sour.

Since March 23, 1978, the United Nations Interim Force in Lebanon (UNIFIL) has been headquartered in Naqoura.

In 1875, during the late Ottoman era, Victor Guérin described it: "The village stands upon a hill, on the south of which is a deep way, through which flows a spring called 'Ain Nakurah, which waters plantations of fig-trees and olives mixed with palms. The village contains 400 Metawileh. The houses are modern, but some of the materials appear ancient by their regularity and dimensions. There must, therefore, have been an older village here, the name of which was probably similar, if not identical."[2] According to Guérin, the place is associated with the historic Ladder of the Tyrians (Scala Tyriorum).[3]

In 1881, the PEF's Survey of Western Palestine (SWP) described it: "A village, built of stone, containing about 250 Moslems, situated on low hills by sea-coast. Gardens of olives, palms, pomegranates, figs, and arable land ; brushwood to the east. Two springs with plentiful supply of water."[4]

It's recommended to enjoy few hours there, and then continue your trip to Sour/Tyre and enjoy the sandy beach there.
You can also enjoy some water activities over there such as pedalo or paddle boards.

Sour/Tyre is a vibrant city with a lot happening, from restaurants to nightlife.

According to legend, purple dye was invented in Tyre. This great Phoenician city ruled the seas and founded prosperous colonies such as Cadiz and Carthage, but its historical role declined at the end of the Crusades. There are important archaeological remains, mainly from Roman times.

So it would be a great spot to finish off the day.