Baalbek Ruins, Back in time.

Temple of Bachus (Lebanon) is a World Heritage site and one of the oldest in the world. Visiting this place is no short than traveling back in time!

Baalbek, Lebanon's greatest Roman treasure, can be counted among the wonders of the ancient world. The largest and most noble Roman temples ever built, they are also among the best preserved. Baalbek is located on two main historic trade routes, one between the Mediterranean coast and the Syrian interior and the other between northern Syria and northern Palestine. Today the city, 85 kilometers from Beirut, is an important administrative and economic center in the northern Beqaa valley.

Baalbek is a very big and is divided into many sections, so there's a lot to visit within the ruins. Here's some info about the different parts.

-The greatest Temple of Baalbek

Starting by the Great Court Complex of the temple of Jupiter, with its porticoes, exedra, altars and basins, was built in the 2nd century A.D. Construction of the so-called temple of Bacchus was also started about this time. The Propylaea and the Hexagonal Court of the Jupiter temple were added in the 3rd century under the Severan Dynasty and work was presumably completed in the mid-3rd century. The small circular structure known as the Temple of Venus, was probably finished at this time as well. At the end of the 4th century, the Emperor Theodosius tore down the altars of Jupiter's Great Court and built a basilica using the temple's stones and architectural elements. The remnants of the three apses of this basilica, originally oriented to the west, can still be seen in the upper part of the stairway of the Temple of Jupiter.

The temple complex of Baalbek is made up of the Jupiter Temple and the Bacchus Temple adjacent to it. A short distance away is the circular structure known as the Temple of Venus. Only part of the staircase remains of a fourth temple dedicated to Mercury, on Kheikh Abdallah hill.

Built on a podium seven meters above the Court, these six columns and the entablature on top give an idea of the vast scale of the original structure. The Propylaea completed in the mid-3rd century A.D. The entrance structure has towers at either end and is fronted by 12 granite columns. An interior stairway goes to the top of the Propylaea where there is an excellent view of the area.

Three doors lead to the hexagonal front courtyard, where 30 granite columns were originally laid. This six-sided form was built between Propylaea and the Great Court in the first half of the 3rd century A.D.  At the end of the 4th century or the beginning of the 5th century, it was covered with a dome and transformed into a church.

The great court built in the 2nd century A.D. The tower, dating from the beginning of the 1st century A.D. these structures were destroyed when a Christian basilica was built on the site at the end of the 4th century. The entire Court was enclosed by a succession of rectangular and semi-circular exedra or recesses decorated by niches which contained statues. Surrounding the Court, in front of the exedra, was an 84-column Corinthian colonnade of Egyptian granite.

After passing through the Propylaea, the Hexagonal Forecourt and Great Court, the worshiper at last arrived at the Temple of Jupiter. It is reached by a monumental stairway.

Originally surrounded by 54 external columns, most of these now lie in fragments on the ground. The Podium is built with some of the largest stone blocks ever hewn.

Next to the Jupiter complex is a separate building known as the Temple of Bacchus. While the Great Temple was dedicated to the public cult of the Heliopolitan Triad, the little temple was apparently consecrated to a mysterious and initiate cult centered around the young god of Baalbek. The entrance through the lofty monumental gate and the view of its ornate interior constitutes one of the loveliest sights of Baalbek. The 15th century tower at the corner of this temple is a good example of the Mamluke fortifications of Baalbek.

The gem-like temple southeast of the acropolis was built in the 3rd century A.D. It was not by accident that during the Byzantine period it was converted into a church dedicated to Saint Barbara, who is the patron saint of Baalbek to this day. Near the Temple of Venus are the remains of «The Temple of the Muses», dating from the beginning of the 1st century A.D.

What you can eat

In the other hand, do not forget to eat once you arrive, I would recommend you walk a few minutes into the small street and find a small shop selling chicken shawarma for around 1.65$ and falafel sandwiches 1.50$ and cold drinks. Great value and its good idea to have something to eat before you head inside to visit the ruins. Also, every summer there is outdoor shesha bars, they also serve drinks dessert dinner lunch breakfast. You can eat also the famous Safiha Baalbakya, 1 Kilogram costing around 20$.  In addition to oriental pastries are offered by Patisserie Jawhari, there you can find traditional sweet food from Lebanon, Syria, and Turkey. The most famous sweet selled is called " Namoura bel Ashta" which stands for Namoura with Cream. This cream is extracted from fresh boiling milk. More pastries are found including the famous Knefe and Beqlawa.

Baalbek is a city located east of the Litani River in Lebanon's Beqaa Valley, about 67 km (42 mi) northeast of Beirut. It is the capital of Baalbek-Hermel Governorate.

In Greek and Roman times Baalbek was also known as Heliopolis (Greek for "Sun City"). In 1998 Baalbek had a population of 82,608, mostly Shia Muslims, followed by Sunni Muslims and Christians.

It is home to the Baalbek temple complex which includes two of the largest and grandest Roman temple ruins: the Temple of Bacchus and the Temple of Jupiter. It was inscribed in 1984 as an UNESCO World Heritage site

In 1922 French scholars undertook extensive research and restoration of the temples, work which was continued by the Lebanese Directorate General of Antiquities. Baalbek's temples were built on an ancient tell that goes back at least to the end of the third millennium B. an enclosed court was built on the ancient tell. During the Hellenistic period the Greeks identified the god of Baalbek with the sun god and the city was called Heliopolis or City of the Sun. At this time, the ancient enclosed court was enlarged, and a podium was erected on its western side to support a temple of classical form. 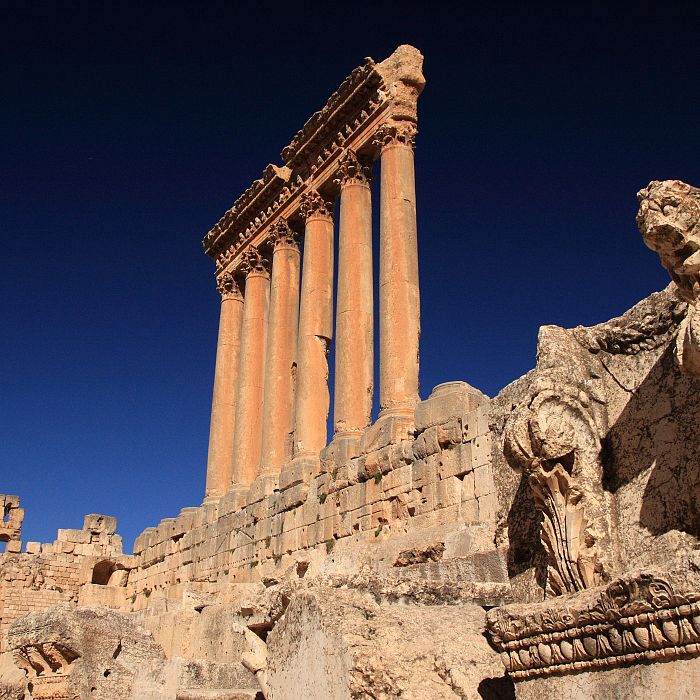 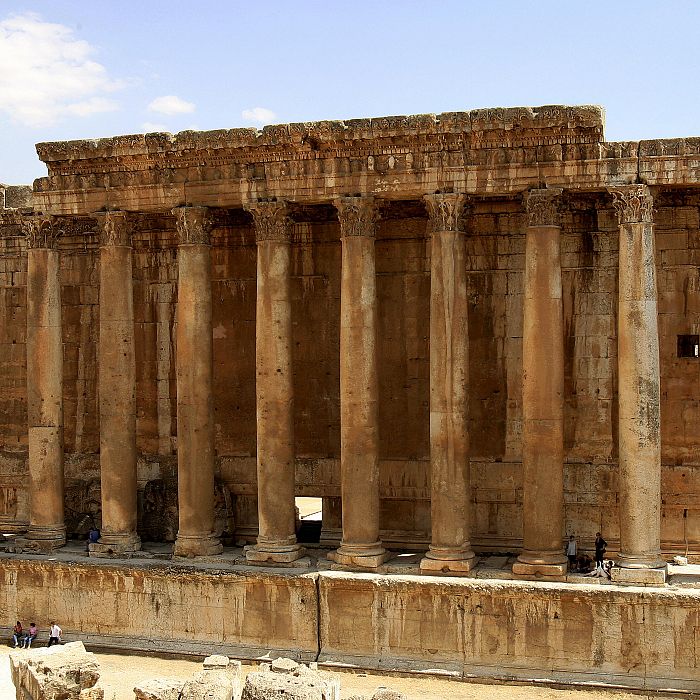 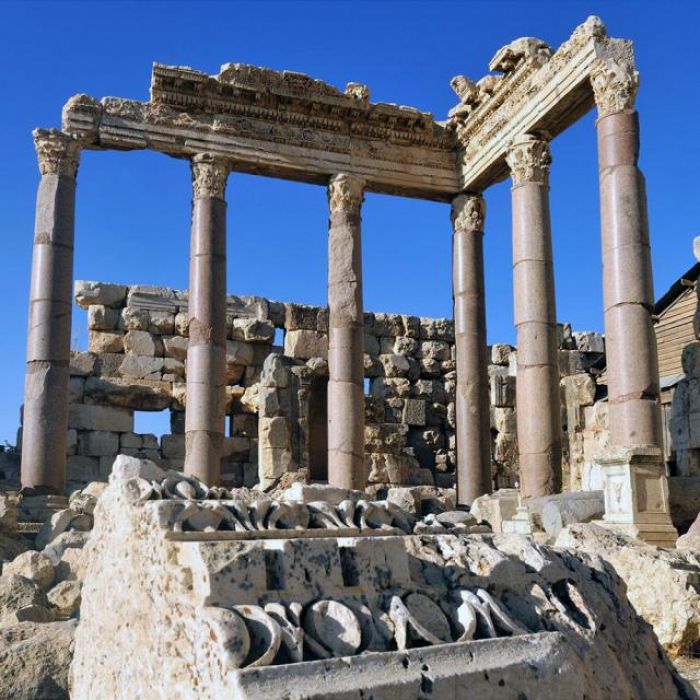 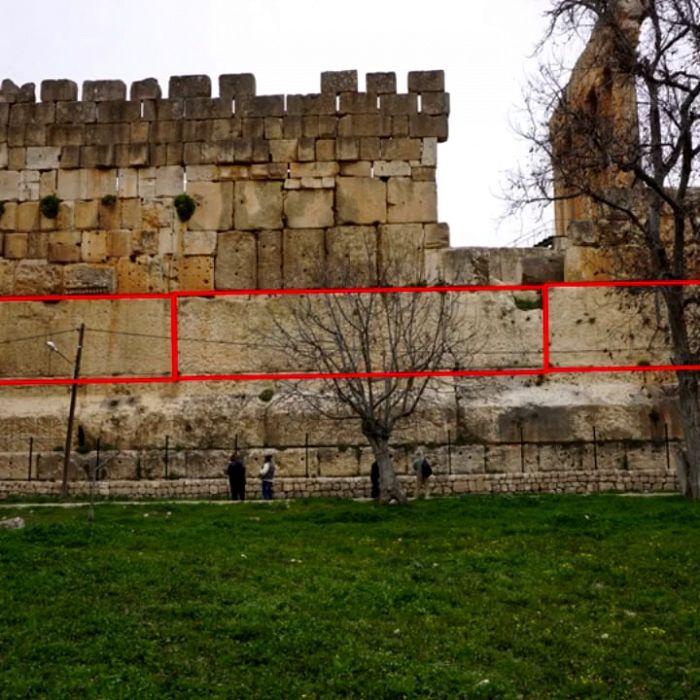 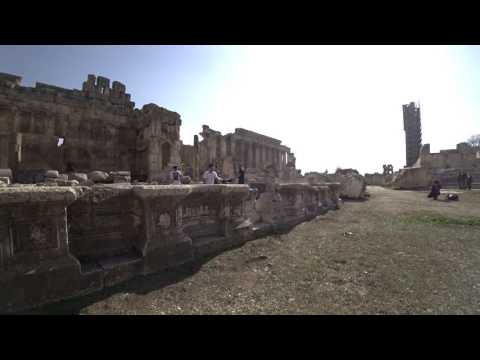